Once again, we witnessed a mass shooting: hundreds of individuals killed or hurt by one gunman who astonishingly was able to compile an arsenal of weapons in his room at the Mandalay Bay Hotel and Casino complex in Las Vegas, Nevada.

The question still begs to be answered as to why he committed such a heinous act. 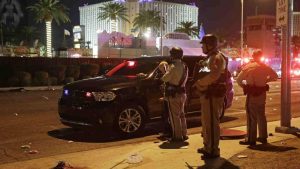 What we do know is Stephen Paddock, the shooter, planned this event meticulously. He was clear in his intentions to implement this human catastrophe.

Look at the sequence of his actions: buying the guns, altering them into automatic weapons, sending away his girlfriend, and using a sledgehammer to break the windows of his room. This and other evidence were signs of his intentions to kill and wound innocent people.

Our hearts go out to the families and loved ones of those who lost their lives or were wounded.
They have been traumatized and victimized and need our support.

We also appreciate the first responders and those who heroically protected those around them who were so diligent to run into the face of danger to help those who were wounded.

To find the location of the shooter within 10 minutes was quite remarkable. Yet, that short period was enough for Paddock to commit so much senseless human carnage.

There is still much to learn about Stephen Paddock.

I’m sure more details will soon be uncovered and that the information may help explain his extremely troubled private world.

For those of us who have seen the evolution of such violence within a human being, we understand that this resultant behavior usually has some root in what has happened to him in his past.

We do know is that his father was arrested at a very young age. We can only speculate how that event impacted his self-perception. We can be curious about his feelings about his dad and how he was supposed to live a life in the shadow of such a family legacy.

We wonder how it is someone can feel permission to harm so many people. What kind of destructive entitlement was a part of this individual’s life that would allow his internal world to rationalize such a horrific set of actions? We can only look to the individual’s past to try to understand.

Yet, we feel a sense of powerlessness and injustice

When we look at perpetrators who victimize others, we become angry. It is predictable that we should feel a sense of injustice, powerlessness and anger.

However, as I have written in other posts, mass shootings and similar types of events occur in the lives of our children. We know the impact of trauma connects to their adult lives physically, emotionally, relationally and ethically.

A lifetime of pounding negative messages—especially if isolated from positive messages—can often result in some sense of brainwashing. It can result in destructive entitlement and seem logical to the damaged individual that it is permissible to hurt others as a way to create some sense of reparation for losses.

What can destructive entitlement cause?

To a greater or lesser degree, most perpetrators believe they are destructively entitled to victimize others. To know that this “feeling or belief” exists around us is extremely disconcerting. It makes our world feel like a very scary place in which to live. It makes us feel unsafe.

As I stated, I do not know the story of Stephen Paddock, but it is not an unusual story in our society.

As we understand more about the impact of childhood trauma, we should really have our radar high in our families, foster care homes, pre-schools, our elementary, middle and high schools and anywhere where children care being cared for.

We need to be concerned about children whether they are victimized physically, sexually, or emotionally. We truly need to be diligent and active to help them process their personal trauma narratives.

Moreover, we even need to be aware of silence, as their silence speaks loudly to us of their need.

We must be alert to hear the messages and recognize the core beliefs of these traumatized children to prevent them from accumulating a lifetime of toxic stress that could be released in ways that victimize those around them.

For us all, the Las Vegas shooting is a harrowing and disconcerting awareness that our world can become unsafe so quickly. Yet, the right voice at the right time in the life of Stephen Paddock may have brought him a different interpersonal perspective that could have restrained or prevented such a violent act.

We need to keep training more people on how to recognize and deal with trauma. It’s a wise place to start.