Like anyone connected in any way with children in this country, my heart is breaking for the students killed in Florida this past week.

I also grieve for our country. We seem to be somehow paralyzed and incapable of tackling this problem, and really doing something to change our future, our children’s futures.

I think everyone agrees that this has to stop, but where is the action behind the words?

Maybe it is going to be the youth of this country who will finally create the momentum to make the changes that must be made. These are the young people who are speaking up and speaking out.

I am old enough to remember what happened in the 60s with all the protests around the Vietnam war. The young people of this country rallied then because they saw something horrifically unjust in our government allowing so many young people to be put in harm’s way.

They protested young people being forced to participate in battles in a country unrelated to us, where young people were murdered, maimed, and both physically and mentally traumatized. It was the young people who rallied and refused to be ignored.

I’m inspired by the words of Florida school shooting survivor David Hogg who pleaded for U.S. lawmakers to work together.

On CBS This Morning, Hogg said the following: 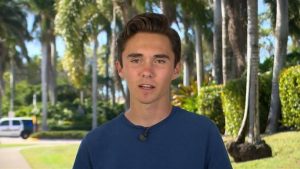 No matter what policy you support, you guys are politicians. Make some compromises, get some stuff done and keep doing it. Actually keep your promises. Don’t just make false promises just so you can get re-elected. Actually follow through.

And who knows? Maybe you’ll save some children’s lives, because the amount of deaths that I’ve had to deal with, with my sister having three of her best friends die, and the numerous other families that have to go home to silent rooms for the rest of their lives with no children, is absolutely unacceptable. It’s deplorable. And something has to change.

The policy makers in this country must work together. And I don’t care if you’re a Republican or a Democrat. These are children’s lives. That’s the end of the line.

Please take two minutes to listen to him share more of his specific, passionately stated recommendations.