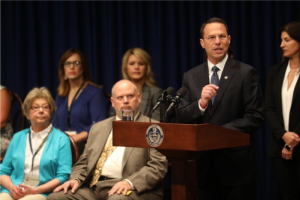 The grand jury report regarding the sexual abuse of over 1000 children by 300 Catholic Priests was published and discussed this week by Commonwealth of Pennsylvania Attorney General Josh Shapiro. This lengthy report details shocking facts of rampant abuse throughout Pennsylvania.

Attorney General Josh Shapiro made this announcement with many of the victims next to him on the stage. Unlike many scenes like this, these victims were older adults who had been bearing this awful burden for years and sometimes decades. Many are currently unable to press charges because the statute of limitations has passed for any form of prosecution.

As the graphic details of rape, deviance, manipulation and physical and sexual abuse were described, it was quite alarming to think that this goes on in church environments that parents and children thought were so safe. The sacred nature of the church that should reflect God’s love, mercy, grace and safety has become a place of torturous memories for these victims.

What has been hidden?

Of more concern is the fact the report details cover-up after cover-up of this abuse. Rather than dealing with the pervasiveness and prominence of this kind of abuse, the Catholic Church hierarchy intentionally denied, hid, and diverted the facts to such an extent these priests were not only able to commit such abuse, but even when the abuse was discovered, they were allowed to continue in their role as a spiritual leader within a community of faith.

Attorney General Shapiro used the term “religious weaponry” to describe these actions. In other words, the spiritual leadership and authority of the priesthood used their roles to exert power over these children in order to provide sexual gratification to these members of the clergy entrusted to provide spiritual care to our children and families.

The wake of life devastation for these victims is significant.

I know there have been years of emotional, psychological and physical consequences to these victims. One young man was so heavily abused that his back was hurt to the point that he had to take prescriptions to endure the pain. Sadly he overdosed and now is no longer with us.

These stories and more are a part of the pain of parents. Also the loss of credibility by our religious leaders in society is disillusioning to so many who depend on them to provide spiritual guidance.

I realize that the priests are human with human limitations.

I feel for those priests who are working diligently to care appropriately for their parish members. They do not deserve the perceived lack of trust they will receive in the days to come. However, there are many issues and questions that need to be addressed in order to deal with such pervasive, life-dominating, destructive and rampant sexual abuse.

It is my hope the Catholic Church leadership will be willing to be transparent, openly review these cases, and take measurable steps to protect our children while they are their religious context.

I also hope these victims who have been ignored, shamed or simply disregarded for these many years, will finally be heard. They need to regain the voice and personal power that has been taken away. They need permission to recognize that this was not their fault.

They also need a place to process what happened to them in trauma-informed, safe and therapeutic relationships so they can begin the long process of recovery.

This is a tragedy with huge state-wide impact. We need to address it with resolve to confront the abuse, expose the cover-ups and protect our children from such life-devastating tragedies.

For struggling students, success is often an elusive dream and failure a painful reality. Lakeside's brain-based, trauma-informed approach to serving young people alters that reality. When students perceive themselves as failures, they can react by withdrawing or acting out. Lakeside offers another option, one that leads to success today and in the future. Our therapeutic schools and … END_OF_DOCUMENT_TOKEN_TO_BE_REPLACED