Most of us can recall times when our parents would share stories about themselves, sometimes sharing the same story over and over again (groan—did I roll my eyes out loud?)

But there are times when a parent’s story can be a source of connection and comfort to a child. 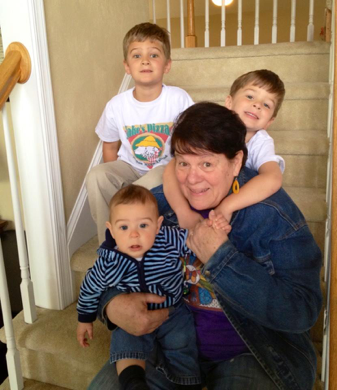 So often, children can feel isolated and alone when they experience rejections, disappointments and loss. These are when a parent’s story can change the landscape of a child’s feelings.

Here’s what I mean.

I have a very clear memory of being in fourth grade, lining up to go back into the classroom after recess and overhearing girls in the classroom talking about being invited to a party one of them was having over the weekend.

I realized I was probably the only girl not invited. It was a defining moment for me because of the feelings of rejection and sense that I did not belong or fit in.

I realize now that I was extremely shy and not well-versed in social skills; so, chances are I wasn’t on the top of the list of “Kids to Invite to My Party”. I stood in line mute and overwhelmed with feelings of rejection and shame.

I held that sadness inside, and I think the beliefs that it created haunted me for many years.

What reminded me of the story was a commercial currently being aired in a series by Angel Soft.

The ad series is called “Be Soft, Be Strong,” and it features parents (primarily fathers) interacting in attentive, tender ways with their children. For television commercials, these are pretty insightful and compelling!

The one that struck me about parents telling stories was one where a teenage boy is sitting in the bathroom, wiping his tears, while his father sits outside the closed bathroom door offering words of comfort. [The ad is called “First Breakup”]

The boy tells the dad that his words aren’t helping. That is until the dad says, “When I was your age, the only girl who would talk to me was grandma,” at which point the boy smiles and gives a relieved chuckle. The commercial portrays a relational moment of connection when a parent understands because he had a similar experience.

I’m not sure if I ever told my mother that I was not invited to a party that everyone else had been invited to. I am sure that if I had told her and she had shared a time when she had similar feelings, I wouldn’t have felt so alone.

We all need to know we aren’t weird or aberrant when we struggle with overwhelming feelings, especially from being embarrassed or rejected.

Children can be especially vulnerable because they are trying to figure out who they are and developing a sense of worth. When parents can share stories that let kids know they’ve “been there,” children can feel understood, accepted and appreciated.

Please hear me: I am not encouraging parents to tell long and involved stories about themselves showcasing how wonderful, brave or clever they were.

Parents can use their life experiences to help build relational connections of shared struggles and shared feelings. Transmitting messages that communicate, “I understand how you feel because I have felt that way myself” can bring parents and children closer to each other.

And I applaud the Angel Soft ad team for their inspiration and encouragement to parents.