I have been inspired this past week by the passion of so many of our young people who are exercising their right to demonstrate civil disobedience. They are determined to have their voices heard around the issues of gun violence and safety in schools.

CBS’ program 60 Minutes featured a segment on March 18 entitled Students of Stoneman Douglas High School. A group of students from the Parkland Florida School where 17 students and school staff were murdered has created what they are calling The Never Again Movement — and they are being taken seriously. After all, they made it to 60 Minutes and are being featured on CBS This Morning and Good Morning America as well.

They have organized the March for Our Lives event to take place in Washington, DC, and all over the country on Saturday, March 24, to provide a voice for young people along with all who are fed up with the lack of meaningful responses to stop school shootings. Wow!

How commendable to take organized civil action in support of their beliefs.

I feel a deep sense of pride and gratitude that this group, who I think represents our young people today, are recognizing how important it is for them to take a stand and be heard. Even though most of them are 17 years old and younger—not yet old enough to vote — I think we should consider them to be American patriots. They have such drive to protect their fellow students by addressing and attempting to influence systems as big as the national government, demanding that legislators take meaningful action.

In the 60 Minutes segment, attention was paid to how often the younger generation is described as notorious for its short attention span and the fact that its members are used to getting quick answers right away— this is the cell phone/Google-driven generation. 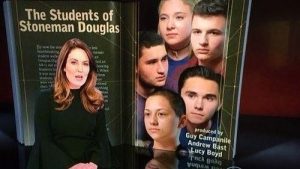 However, this segment also highlighted the fact this group is also not taking “no” for an answer when it comes to finding ways to make real change. They are willing to stand up for what they believe, regardless of any negativity (They talked about receiving death threats! How crazy is that? What happened to free speech?). Maybe we should focus on seeing the positives for a generation driven by a passionate demand for action NOW.

This past week also saw thousands of young people all over the country joining together to have their voices heard through their 17-minute walkouts from their schools (one minute for every person who died in the Parkland shooting.)

They did this despite many schools threatened and even executed punishments for any student who participated (One of the students on GMA mentioned that some schools actually paddled kids who participated! Seriously?).

It is so sad that it took yet another school shooting to motivate this group of students to then motivate other students to engage in civil disobedience to make their voices heard.

But I think America’s power as a country is built on our willingness to demonstrate our right to have our voices be heard, often accomplished through civil disobedience.

Recently, I had the opportunity to speak with two young students, one in 8th grade, the other in 11th grade, both of whom were planning on participating in the walkout and whose schools were supportive of students using this forum as a way to have a voice in the current gun violence crisis.

Their eyes shone as they spoke with such passion and conviction about exercising this right to protest being unsafe. Being able to participate was inspiring them to appreciate they could have a voice to promote action. I am thrilled that this experience is helping them embrace the right, responsibility, and power they have to participate in the ways our government functions.

This movement gives parents a wonderful opportunity to explain civil disobedience to their children.

It also can help them realize the power we citizens have to make our voices heard, to use our power to vote and to inform public servants we elect they will be held responsible for their actions and lack of action.

I suggest you start with Wikipedia to give you some added information you can then share with your children.

Many thanks to the students who are turning a tragedy into a movement to evoke change. We can’t be complacent about making our legislators know we are holding them accountable and our young people are leading the charge.

So heartwarming! Gives me (and I hope all of you) hope for the future of our precious republic.