Each year, right around the 4th of July, a significant event in honor of our veterans happens on Lake Gaston at Pea Hill Creek. This location is a lovely cove off the main lake where the American Veterans Tribute Organization takes over the entire area and spends most of the day in a festival to raise awareness of the needs of veterans and honor a specific veteran who has faithfully served our country.

Consider this quote from a letter by John Adams to his dear wife Abigal, dated July 3rd 1776. 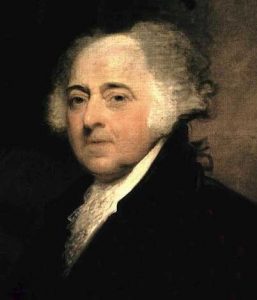 “I am apt to believe that [this day] will be celebrated by succeeding generations as the great anniversary festival. It ought to be commemorated, as the day of deliverance, by solemn acts of devotion to God Almighty. It ought to be solemnized with pomp and parade, with shows, games, sports, guns, bells, bonfires and illuminations, from one end of this continent to the other, from this time forward, forevermore.”

This foresight into the future by John Adams couldn’t be more appropriate. It is exactly the atmosphere we create in the American Veterans Tribute this coming Saturday, June 7th.

There will be bands playing, a cook-out with barbeque, paratroopers, a military fly-by, and the largest amateur fireworks show on the east coast. Hundreds of boats and 15,000 people attend this event annually and the environment created is a rather magical one that truly honors a single veteran while advocating for all of our veterans. 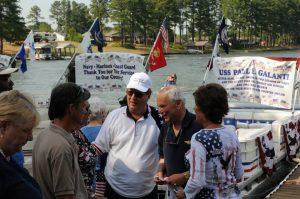 The evening ends with a laser show, the AVT Band finale performance, and more fireworks in the background. This year we will also be featuring Gordon Mote, an internationally known gospel singer, who will sing in honor of our veterans and our specific honoree.

Born in Tuscaloosa, AL in 1943, Joe grew up in Tuscaloosa then on Long Island while his Father was a pilot for Eastern Airlines. He attended Marion Military Institute during High School and his freshman year of College. He attended the University of Alabama before joining the Marine Corps in June 1962 then married Jacqueline “Jackie” immediately after boot camp.

He returned to college on the Naval Enlisted Scientific Education Program in 1964 where he received engineering degrees prior to being commissioned as a 2nd Lieutenant/ Wadle served in Vietnam (1st MAW Security & Communication units and 1st Force Reconnaissance Company) and at Headquarters Marine Corps before leaving active duty.

Wadle began working for Exxon in August 1972, but he served another 26 years in the Marine Corps Reserve before he retired as a Colonel in June 1998. He served mostly with Infantry Battalions including, as Commanding Officer 3/24, and later in staff positions at Marine Forces Reserve level.

For anyone near Southeastern Virginia and Lake Gaston, we invite you to join us in celebrating our veterans. It is an experience that is worth attending.

We should know our veterans are being honored in tangible ways, and this is an example of how much we value their service and their continued impact in our country.

As a member of the AVT Board of Directors and of the AVT Band, I am very proud to share this event with all who attend. It is a privilege to take some time each year to honor our national heroes.

For struggling students, success is often an elusive dream and failure a painful reality. Lakeside's brain-based, trauma-informed approach to serving young people alters that reality. When students perceive themselves as failures, they can react by withdrawing or acting out. Lakeside offers another option, one that leads to success today and in the future. Our therapeutic schools and … END_OF_DOCUMENT_TOKEN_TO_BE_REPLACED