I often post about the need for resilience that enables individuals to overcome tough obstacles. Resilience is a quality we try to instill in our students as they have struggled with so many of life’s challenges. It is quite gratifying to see their persistence and resilience pay off as eventual success. 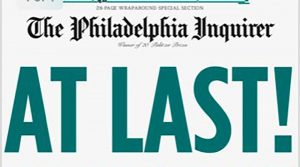 All of us who are fans of the Philadelphia Eagles have watched what has happened in their performance in this past year.

The team has encountered many injuries to key players but has bounced back each time. Meanwhile, other players stepped into key roles and performed with discipline and quality play. There were many games where the team had to rally at different moments, rise to the circumstances and eventually win the game. Persistence and resilience led the Eagles to win those challenging games, to win their division then the NFC championship. Now the Philadelphia Eagles have won their first Super Bowl.

It has been an amazing season for the Eagles.

I have watched this team with some interest this year. As I posted recently, the players have had a huge impact in the Philadelphia community. They have helped many in need. They have especially worked with children who have some special needs. Their efforts have added to our community morale and provided diverse support to our families.

They also are a team with a special faith.

The Eagles’ are very open about their spiritual connection to God and each other. I think it has added a distinctive atmosphere for the team and it seems to be consistent in how they have conducted themselves in this past year.

They have attempted to be good role models for our kids as well as mentors to many youth that they have touched in this past year. The team has had a unique unity and positive spirit which showed as they have depended on each other all season long.

At times, I hear less than favorable stories about some athletes. So, it is encouraging to see that professional athletes like the Eagles can join us in assisting children who are in need of support and encouragement. Whether the children were in the hospital, diagnosed with a mental health issue, lived in poverty or just in need of a mentor, I have watched Eagles players reach out and try to help kids overcome obstacles.

As the Eagles celebrate their national championship, many children also are encouraged and excited to see their heroes have also overcome some incredible odds, challenged their underdog labels, and now are Super Bowl champions.

Congratulations to the Eagles for their resilience and significant win, but also for their exemplary character.