If we can see anything positive in what has happened with the immigration crisis in which thousands of children have been separated from their parents in recent weeks, it may be how it has evoked a universal outcry uniting people who, in their outrage, are demanding change.

The outcry seems to have awakened the deep moral code that drives us to protect and safeguard vulnerable children.

It has been a call to action, and hopefully, the actions will both bring children and parents who were separated back together and prevent this cruel practice from happening ever again.

What is it about separating children from their parents that causes such a visceral response in each of us?

I think the answer lies in some of the research around abandonment.
According to therapist Susan Anderson in her book, The Journey from Abandonment to Healing:

Abandonment is our first fear. It is a primal fear—a fear universal to the human experience. As infants we lay screaming in our cribs, terrified that when our mothers left the room, they were never coming back. Abandonment is a fear that we will be left alone forever with no one to protect us, to see to our most urgent needs. For the infant, maintaining attachment to its primary caretaker is necessary for its survival. Any threat or disruption to that relationship arouses this primal fear, a fear that is embedded in the hardware of our brains, a fear we carry into adulthood.

When children experience feelings of disconnection, they do not have the defenses to fall back on what we as adults do. Their wounds may not heal but instead float beneath the surface of their lives right into adult hood.

When an infant, toddler or young child experiences abandonment, as happens when children are separated from their parents, they are overwhelmed by their sense of terror.

Abandonment causes a kind of instant paralysis that leaves a child in a state of utter despair.

What happens in the child’s brain is complex. In many ways the mind and the brain have to shut down. 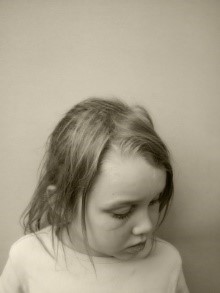 The brain shutting down occurs because their pain is so great that after the initial crying, screaming, pleading responses, children often “disappear” into a state of dissociation. Their dissociation happens as they are unable to cope with the depth of their fear from abandonment and the resulting emotional pain.

A child may be frozen in their terror.

They also may appear to be able to recover enough to function, but this is a protective reaction that allows them to engage in order to survive.

Sometimes adults misinterpret children’s calmness after the initial terrified responses as an indicator that they are adjusting. However, that may not be the case. If anything, their brain has been so overwhelmed they go into an unnatural state of “contrived calmness.”

Early abandonment experiences are one of the most significant types of trauma a child can experience.

Children need and deserve to be securely attached to their primary caregivers, experiencing the cocooning aspect of a safe, predictable, loving relationship. Anything else interferes with their ability to thrive.

The children we see on television, whose faces express overwhelming terror and fear, are having their brains deeply wounded. Traumatic memories are being created that will leave them forever changed unless there are immediate trauma-sensitive responses.

In Dr. Bruce Perry’s, The Boy Who Was Raised as a Dog, he describes what he and his staff observed when they cared for the children from the Waco massacre. After the initial stressful responses when separated from their parents, the children appeared to be calmer and able to play and interact with the adults around them.

The authorities even challenged Dr. Perry for being so concerned when the children looked outwardly relaxed. They thought that behavior was indicative of them being just fine. It was only after he told them to measure the children’s resting heart rates, an indication of their internal stress, that they were convinced that the children were indeed under extreme internal stress (the heart rates were in the 160s instead of being in the normal range of the low 100s).

We need to appreciate just how traumatized children are when they experience forced separation from their parents as is happening in this immigration crisis. We also need to help parents appreciate that adults caring for these children need to have trauma-sensitive responses in order to help alleviate some of the extreme stress these children have experienced.

We can’t sugarcoat this issue either.

Once reunited, children may seem to be recovering. Still, all the research on trauma and abandonment makes it clear that some of the damage is profoundly deep and very difficult to mediate.

Our country needs to take responsibility for providing both short and long-term emotional care for the damage done by this immoral treatment of children. Plus, we need to find ways to ensure that this does not happen again. It is our moral responsibility.

For struggling students, success is often an elusive dream and failure a painful reality. Lakeside's brain-based, trauma-informed approach to serving young people alters that reality. When students perceive themselves as failures, they can react by withdrawing or acting out. Lakeside offers another option, one that leads to success today and in the future. Our therapeutic schools and … END_OF_DOCUMENT_TOKEN_TO_BE_REPLACED