Recently, I was at a friend’s house hanging out and enjoying time with her and her two young children, ages 3 and 8, when the three-year-old slipped off the chair he was sitting on, banged his head on a nearby piece of furniture and dropped to the floor.

I saw him jump up and run out of the room.

He ran into a first-floor bedroom—even though his mom was only a few feet away cleaning up the dishes at the sink. Within seconds, we heard him wailing from there.

Looking alarmed, his mom immediately headed in that direction.

I turned and looked at the eight-year-old who calmly said, “It’s okay. That’s what he does when he gets hurt. He runs away.”

I felt my heart breaking.

I have known his family for a while and have been very troubled by the fact that they regularly use corporal punishment. They follow the dictates of the author of Shepherding a Child’s Heart, a book that I feel promotes child abuse under the guise of some sort of Christian parental responsibility.

I had occasionally witnessed this highly toxic form of disciplining—punishment, actually—used on these children from the time they were very little. The children were punished for the slightest misbehavior, or even normal behavior that involved touching and exploring.

They were dragged away to a bedroom, had their pants pulled down and were slapped multiple times.

All the while they were being told that this was done because good parents are teaching children to obey, something they must learn in order to have God love them…or something like that.

And yes, I shared some of my research on why this form of disciplining was damaging, but was met with cold resistance. I decided I’d rather remain friends and possibly be a source of comfort to these children one day, always hopeful that the parents would someday realize the damage they were doing.

While overall they were loving, attentive, and nurturing parents most times (except when they determined their children needed to be punished), my thoughts, as I listened to this little guy wailing in the other room, focused on something else.

I recalled a quote provided in Childhood Disrupted by Donna Jackson Nakazawa when she shared what child psychiatrist Dan Siegel states about a child’s worst dilemma [Page 138]:

“When a parent is the source of trauma, a child’s brain says, Run from this person to survive. But at the same time, the brain says, run to this person—they are my survival. If one part of the brain says ’Go to mom,’ the brainstem says,’ Go away,’ it’s an unsolvable biological paradox. Two circuits in the brain are activated with completely different goals. The child cannot do both at the same time. The mind of the child fragments because those two circuits are trying to function together and integrate, and they can’t.”

Imagine the terrible dilemma created for this child.

He is totally dependent on his parent for survival, but can’t go to her when he is in pain. 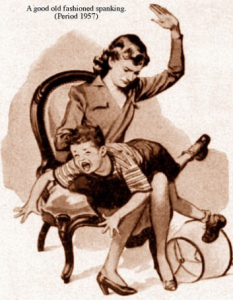 I believe this little guy learned that when he hurts himself, he needs to run away and be by himself, consoling himself all alone.

His mother, being concerned he was hurt, did all the right things by going to him, holding him, and reassuring him that he was okay. She made sure that he had nothing more than a superficial bump on his head.

I wonder if the nurturing done most of the time could ever compensate for those times of being smacked repeatedly and hearing that somehow this was what parents are told to do by God.

Why wouldn’t a child want to run when pain is associated with fear of his parent?

I had a conversation with a good friend of mine the other night and described all this to her. She looked very solemn as she reflected on her own childhood.

“Yes, I was hit all the time, not with that same God-message but nonetheless, I too would never go to my mother when I got hurt. I always went to my room and cried by myself because I never really felt like she was somewhat safe to go to. She was the one who so often caused me pain, why would I ever believe she could be a source of comfort?”

Parents usually want the best for their kids.

Some use physical or emotional pain to discipline/punish their children because that is what was done to them.

Others may do it because they have been deceived by those who profess to be parenting experts, who promote corporal punishment as something God requires them to do.

Some are sucked into convincing arguments by family and friends to use corporal punishment.

I ache for the children who, like my little friend, can’t run into their parent’s loving arms when they are hurt.

I ache for the parents who are unaware of the damage they may be doing when they use physical or emotional pain to somehow control their children.

The price of gaining that control is utterly heartbreaking. Parents have no idea the horrible dilemma they create and the damage they do deep within a child’s soul.

Invisible wounds can be the hardest to heal.

For struggling students, success is often an elusive dream and failure a painful reality. Lakeside's brain-based, trauma-informed approach to serving young people alters that reality. When students perceive themselves as failures, they can react by withdrawing or acting out. Lakeside offers another option, one that leads to success today and in the future. Our therapeutic schools and … END_OF_DOCUMENT_TOKEN_TO_BE_REPLACED