Last week I went to the movies with some friends to see the documentary “Won’t You Be My Neighbor” based on the life of Fred Rogers.

Fred Rogers was the creator and star of the PBS television series Mr. Rogers. According to Wikipedia, “The series originated in 1963 as Mister Rogers on CBC Television and was later re-branded in 1966 as Mister Rogers’ Neighborhood, and later, Mister Rogers’ Neighborhood on the regional Eastern Educational Network (EEN, a forerunner of today’s American Public Television). The US national debut of the show occurred on February 19, 1968. It aired on NET and its successor, PBS, until August 31, 2001.”

When they were little, my children and I loved the show. Frankly, I was amazed at all the behind-the-scenes information the documentary provided, giving a window on the mind and heart of this amazing American legend.

It was more than just a show.

Mr. Rogers Neighborhood was a loving and engaging weekly invitation to children to feel special just the way they were.

Brooks wrote, “During the civil rights era, when black kids were being thrown out of swimming pools, Rogers and a black character bathed their feet together in a tub. After Bobby Kennedy was killed, Rogers gently explained what an assassination was.”

“Rogers often comforted children on the show and taught them in simple terms, but the documentary shows how he did so with a profound respect for the dignity of each child that almost rises to veneration.”

Mr. Rogers was a model for parents everywhere, providing messages that children were thirsty to hear…

…“There’s no person in the all world like you, and I like you just the way you are. When I was a boy and I would see scary things in the news, my mother would say to me, ‘Look for the helpers. You will always find people who are helping.’”

He shared wonderfully simple and basic messages for parents to embrace and use with their children, such as, “People have said, ‘Don’t cry’ to other people for years and years, and all it has ever meant is: ‘I’m too uncomfortable when you show your feelings. Don’t cry.’ I’d rather have and say, ‘Go ahead and cry. I’m here to be with you.’”

Messages like this taught both parents and children about the nature of grief and what actually helps a child deal with their grief. He wanted children to know their feelings were okay, and he wanted parents to learn that they should accept their children’s feelings. 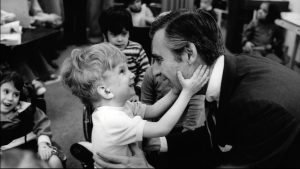 So many of his messages encourage children to be kind and loving. He wanted for them to see the power to help others even though they were just children. He helped them to embrace their worth and learn about the powers they have to influence others.

There is a touching scene in the documentary when Mr. Rogers interacts with Koko, the gorilla made famous because of her abilities to use sign language. Koko tenderly strokes Mr. Rogers face and eventually hugs him, signing that she loves him. Animals can be very instinctual, and this was an example of how much Koko understood who Mr. Rogers really was.

Click here for some snapshots into some of the issues Mr. Rogers brilliantly addressed.

Please check out the trailer to get a taste of the documentary. Better, see it in your local theater or when it comes out on video. It’s the story of one man’s love for children and his journey to find so many ways to express that love and embrace children with so many important messages.

He was a gentle but powerful American hero from whom we can learn so much. Not only does he teach us about ourselves, he also gives us a powerful glimpse at how children should be treated.