I have written about dysregulated students and how we provide solutions for dysregulation with Lakeside’s trauma training. Some individuals may not know exactly what dysregulation is. I thought I would write to “define my terms.”

Emotional dysregulation (ED) is a term used in the mental health community to refer to an emotional response that is poorly modulated (controlled), and does not fall within the conventionally accepted range of emotive response. 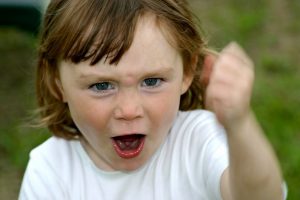 This emotional response is due to a brain arousal condition that is usually triggered by some outside stimulus that elicits a strong emotion such as high threat, fear or anxiety. Usually it is a sign that the lower regions of the brain are in high arousal, when the “fight or flight” syndrome takes over.

Such a strong emotional brain state creates deficits as a lower functional IQ, a limitation on ability to focus on future time, reflexive thinking, and a higher heart rate. In other words, the sections of the brain that control our more basic body functions such as breathing, heart rate, etc., are more active and foster an imbalance for the brain.

As we observe emotionally dysregulated children, we find both internal and external behaviors symptomatic of dysregulation.

Emotional dysregulation in children can be associated with internalizing behaviors including

Emotional dysregulation in children can be associated with externalizing behaviors including

There are many ways to help children and teenagers who are dysregulated.

Particularly in classroom situations, we train teachers to deal with dysregulated behaviors through trauma-informed and brain-based interventions.

To learn more about how to help dysregulated students, I recommend our latest on-demand course for classroom management called Neurologic.

Thanks again for reading Lakeside Connect.

For struggling students, success is often an elusive dream and failure a painful reality. Lakeside's brain-based, trauma-informed approach to serving young people alters that reality. When students perceive themselves as failures, they can react by withdrawing or acting out. Lakeside offers another option, one that leads to success today and in the future. Our therapeutic schools and … END_OF_DOCUMENT_TOKEN_TO_BE_REPLACED