According to the MacMillan Dictionary, a call to arms is “something that makes people want to take action and get involved in an attempt to deal with a bad situation.”

This is a call to arms for all parents, caregivers and those who care about the emotional health of children to let them know how important their arms, their touch, their attention and their connections are to a baby’s growing brain.

Recently, Dr. Bruce Perry, a leading neurobiologist and child psychiatrist, issued a kind of call to arms in a tweet in which he described the power and importance of early interactions between a mother (and other significant caregivers) and her baby.

He noted the impact a parent/caregiver has on a child is greatest in the earliest moments of a baby’s life, including when mom is pregnant, and then in those early weeks and months after a child is born. “The older the child gets, the less influence or impact there is on them to become healthy, productive adults” because of how rapidly brain growth is occurring.

He shares it is when parents and caregivers hold their babies, rock them, talk to them, or engage with them (even when it seems almost like drudgery) that their brains are being wired to help them become socially attuned and adept, organized, and responsive. They are becoming equipped for later in life because of this promotion of strong brain growth!

Contrast this science with the advice of previous generations. “One hears of the baby who is so good that he never cries, but he’s rarely met in real life—especially in the early stages. You’re lucky, indeed, if your baby doesn’t prove his lung power the first night or two after he gets home from the hospital, and at other times as well.

The modern mother has had it well ground into her that she shouldn’t pick up the baby when he cries. This is good advice, for picking them up teaches baby to cry in order to be picked up… If baby isn’t picked up or fed off-schedule, or doesn’t otherwise gain dividends out of purposeless crying, he’ll soon learn it doesn’t pay. And then you yourself will have one of those precious gems, a baby who ‘never cries.’” [Better Homes & Gardens Baby Book, Meredith Publishing Company, Des Moines Iowa, © 1943, pp. 59, 60]

No matter how often I read this, I still cringe at all the babies left to cry it out so parents might somehow create the “precious gem” of a baby who never cries. At what price?

I can remember as a new mom being given this advice many times.

Some of these messages are still prevalent today, putting pressure on new parents to ignore their baby’s cries or other efforts to connect through hugs and being rocked, sung to, cuddled and played with. “All that attention is just spoiling him!”

These are toxic, destructive, dangerous messages that have the power to negatively influence new parents. If we look through the lenses that Dr. Perry shares, we can recognize that parents and caregivers are the guardians who need to nurture healthy brain growth and development. Amazingly, touch and connection, we have the power to impact the trajectory of children’s lives. 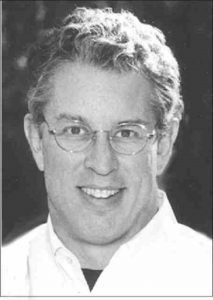 Dr. Perry’s message is a call to arms for all of us!

It’s not just for parents and caregivers who are in direct contact with babies and young children but for all who care about the mental and emotional health of precious children everywhere in society.

We each need to be advocates who promote these messages, so parents and caregivers can freely love, nurture, connect with, and promote healthy brain development in young children.

Please be an advocate for babies and young children!

Please impress on parents and caregivers the value of all those interactions with infants, babies, and toddlers that promote a sense of security, connection and love! Please share Dr. Perry’s tweet or do what I did—walk around with your phone and play it for people. It can be a real conversation-starter and you might be influencing change that influences lives.